Why are the fish belly-up?

1.These fish are native to the warm freshwater areas in Africa,so sometimes in the winter when the water gets too cold (under 55 degrees) they find it hard to survive.

2.The Sea is a nutrient rich highly productive ecosystem. There is a excess of organic materials in the sediments on the bottom of this shallow basin. When we have a few days of high winds, it can stir up the organic material from below which is high in sulfides. This causes a chemical reaction with the natural calcium carbonate in the water causing the fish to suffer from lack of oxygen.

3.There is a high amount of fertilizers in the Sea from the surrounding farmlands. These nutrients feed the algae and when it blooms and decomposes it uses the oxygen out of the water and the fish suffocate.

4.The Salton Sea has millions and millions of fish. It is said be one of the most productive fishries in the world. These dia-off cycles could just be the natural way the fish maintain their populations at a steady capacity.

5.Salt levels in the Sea are increasing due to evaporation and concentration from agriculture. The Sea is now 25% salter than the ocean. Salt water is denser than fresh water and holds less available oxygen for the fish.

There is no evidence of the Sea being polluted or having any harmful chemicals or sewage.

It is said that the Salton Sea is cleaner than Lake Tahoe.
While dead fish are not a real pretty sight or smell,
We are experiencing the life cycle in action.

The fish in the sea remain plentiful & healthy….and the fishing is GREAT!!! 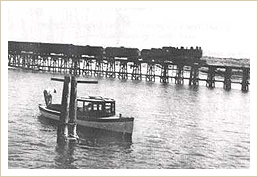 The Salton Sea is not an unnatural “accidental sea”. This myth begins with the factual history of the Sea. Indeed, massive flooding in 1905 caused the Colorado River to break through an irrigation canal head works and flow freely into the Salton Basin for a year and a half. By the time the breach was closed, the present-day Salton Sea was created.

As to its present state, drainage from 500,000 acres of farms in the neighboring Imperial and Coachella valley’s now sustains the Sea. The Sea is a designated federal repository of agricultural runoff, and agriculture is a billion dollar mainstay of the Valley’s economies. Decreased flow into the sea, however, makes its future questionable. 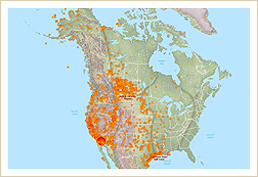 The image here (courtesy of the University of Redlands) shows areas of the North American continent where birds tagged at the Salton Sea have been spotted.

Several million birds migrate and inhabit the area every year. The Sea provides a wintering habitat to over 450,000 ducks and up to 30,000 snow and Ross geese. In fact, over 400 species of birds have been spotted at the Salton Sea National Wildlife Refuge, more than any other place in the U.S., other than the Gulf Coast of Texas. Endangered species also make the Sea their home, including the brown pelican and the Yuma clapper rail. In the past, when the old seas of the Salton Basin dried up, the Colorado River Delta provided the critical wetlands for the migrating birds, but now, since the Colorado River no longer has a delta in Mexico the Salton Sea is their last hope.

Before 1985, the Sea’s State Park had more visitor days per year than did Yosemite National Park, and press reports from the 1960’s highlight the popularity of the Sea as a recreational destination.

A 1985 California Department of Fish and Game study found that the Sea was more productive (fish caught per angler hour) than any California marine fishery and equal to the most productive freshwater fisheries. In 1989, the Department found the annual direct impact of the fishery to the local economy to be 50 to 65 million dollars. A study now underway indicates that the fishery may be the most productive in the world. Some estimates put the number of Tilapia in the Salton Sea at as many as 200 million. That’s a lot of fish!

Business and academic interests have suggested that a restored Sea could drive the regional economy for years to come.

The water is clean.
The State Water Resources Control Board tests the Sea twice a year and has not found pesticides at a significant level in the Sea. Pesticide levels are periodically found to be high at some drains, but the Sea’s sheer volume and most pesticides’ ability to biodegrade seem to limit their impact.

This was further validated with two independent studies conducted by the Salton Sea Science Subcommittee. This research indicated there were no pesticides in the sediment and water of the Salton Sea. A third study found extremely low levels of contaminants in the Sea’s barnacles, a finding which surprised the researchers, because the levels were much lower than found in the waters of San Diego.

Selenium is a naturally occurring element in Colorado River water, the source of the vast majority of the Sea’s water. Selenium is found at elevated levels in some inflows to the Sea and in the sediments of the deepest parts of the Sea. Yet in water taken from the Sea itself, selenium was found at only about 1 microgram per liter and the federal standards allow up to 5 micrograms per liter. The water at the Salton Sea is clean and many of the local residents and tourists frequently swim in what they refer to as “the healing waters” of the Salton Sea.

One of the sea’s problems is its immensity and another is its complexity; it is California’s largest inland body of water and supports a complicated and priceless ecosystem. Still another problem is its location. Far from urban centers and the usually vigilant eye of environmental interests, the Sea has been largely ignored. The environmental community is waking to the Sea’s problems and possibilities (the Audubon Society has made the Sea a number one priority).

There is much more to learn about the Sea. One major factor has and continues to contribute to the Sea’s downward spiral of ecological and economic health: salinity. The Sea’s salinity has increased steadily over the years. Now at 44 parts per thousand, or at a content level 25 percent greater than the ocean, the hypersaline environment is jeopardizing the survival of fish and will ultimately jeopardize the survival of much of the Sea’s biological bounty including the birds and surrounding wildlife.

The time for action is now, when there is still time to develop short term and, ultimately, long term solutions for restoring the Sea. Myths must be dispelled, myths and misperceptions that have contributed to public confusion for so many years.

The Sea’s immensity, complexity, and remoteness may, in the past, have combined to create the Sea’s greatest threat: uncertainty leading to unease, leading to inaction.

However, the knowledge gained from the extensive research on the real problems, coupled with political will to take responsible action, will go far in debunking the myths and making the restoration of the Sea a reality.

But the action we need is NOW. If we don’t do something soon, the sea could be dead in as little as ten years.